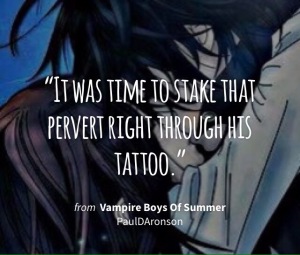 I rode Angela’s bus home. Even after skipping sixth period, she was still pissed about the Trumps, and like always, the conversation was along the lines of “I should have kicked her ass” or “she does that again and I’m going to stomp her.” Of course, both of us knew that was just big talk. You couldn’t just go up and punch Amanda without fighting the rest of them too. And even if you did manage to take them all on and beat them, your glory wouldn’t be long. In fact, they would do their best to turn it into humiliation. That’s what they did to me earlier in the year when I had had a run in with Chrissy. So I told her on the ride home it was best to leave it alone. Angela may have talked big but she understood, and soon we were riding in relative silence.
“Thanks for catching me,” she finally said. I knew she was referring to the hallway incident earlier. “You’re always there for me.”
I smiled. “You’d do the same thing for me.”
“You never did tell me the anime.”
“What?”
“Your drawing. What anime the guy was from.”
“Oh that,“ I laughed. “You just don’t let it go, do you?”
“Nope.”
“It’s a new one.”
“Okay, so what’s it called?”
I knew I couldn’t keep this up for long. I had no choice. “It’s called, I have a hot new neighbor.”
Her eyes grew wide as saucers. “No shit? You’re kidding me.”
“I just caught a glimpse of him last night. I made up most of the picture because I couldn’t see him very clearly.”
Her eyes got even wider. “Were you peeking in his window, perv?”
“No, he was on the back porch staring up into the sky.”
“Well hell, I’ll come over and keep him grounded if you won’t.”
I laughed, shaking my head. “I bet you would.”
“You going to talk to him?”
“I don’t know,“ I said. “We’ll see.”
“We’ll see? What’s wrong with you? Everybody at school already thinks you’re gay. Get the hook up and prove them wrong.”
Leave it to Angela to downplay her Trumps incident by referring to mine. It was the first party of the school year. Earlier that week I had called Chrissy Trump a skanky bitch after she tripped me up in the cafeteria. A girl at the party that I didn’t even know came up to me to say she thought that was the coolest thing ever and she wanted to talk to me outside. I didn’t think anything of it and went outside with her. Next thing I knew she had shoved me into the pool and dived in after me. As I came up out of the water she threw her arms around my neck and kissed me. It all happened so fast and I was gasping for breath so it was easy for her to take advantage. Before I could get away, The Trumps had appeared with cell phone cameras going in rapid mode. I shoved the girl away from me but it was too late. Next day it was all over facebook, Instagram, and twitter; me all wet and wild-eyed with some girl shoving her tongue down my throat.
“You just had to bring that up, didn’t you?” I said to Angela as we got off at her bus stop. “You know that was a set up.”
“Yes I know. But the fact remains everyone thinks you don’t like boys. And you have never had a steady boyfriend, unless you count Charlie Simkins back in the seventh grade.”
“You want to get slugged, don’t you? None of that was my fault.”
“Okay so, prove everyone wrong. Hit on your hot neighbor.”
I knew this was her way of daring me, but knowing Angela, I also knew this was a way for her to position herself if I failed. I wasn’t about to tell her I thought he was a vampire. She’d probably try to bite him back. I sighed. “Look, I’ll introduce myself and we’ll see what happens.”
“What do you mean, see what happens? “
“It means, I’m not going to throw myself at him like some lovesick fool I know.”
“I’m not lovesick, just desperate. Which is what you should be. Tomorrow I’ll be expecting to hear his name. I bet it’s something sexy like Ryan or Tatum. Or better yet Gray. Omg.”
With that she nearly danced up her sidewalk to the front door. “Don’t count on it,” I muttered, wondering what in the hell I’d gotten myself into.

I finally ventured downstairs around eight o’clock. Mom had left some meatloaf and potatoes in the microwave for me before heading off to work. How she managed to drink all day and then sober herself up enough to work the night shift at Walmart was beyond me. I heated up the food, but looking at the ketchup on top of the meatloaf turned my stomach. It made me think of the Asian man with the sneer and pointed fangs.
Venturing back up to my room I decided to get me a shower before heading next door. I needed something to steady my nerves. Part of me wanted to call Angela and tell her what had happened, but instead I just laid my cell phone on the bed and headed for the bathroom. I was so freaked out even the running water in the shower seemed menacing and intrusive. After a while I scared myself into thinking I was being watched. I crossed my arms over my breasts and tried to turn away from the shower door, but I found myself looking over my shoulder, fearing that at any minute the vampire would come lunging through the glass just to get to me. And then I would be like that girl in the puzzle, helplessly hypnotized and a willing victim to the powerful creature of darkness.
I turned off the water, threw open the shower door and grabbed a towel off the rack. If anyone was in the room they were only going to catch a quick glance at me. I have never been self-conscious about my body, but I’m no exhibitionist either. I had worn tight or revealing outfits at times, mostly to go to a show or something, but I had never felt so exposed in all my life. I wrapped my towel around me and nearly dashed into my bedroom where I closed and locked the door. I turned to the bed and noticed my cellphone was gone.
I froze to the spot. I knew I had put it on the bed. But now it wasn’t there. My eyes scanned the room. Perhaps my bathroom freak out was warranted after all. Someone had been here watching. And now they had taken my cellphone. I walked carefully to the window and looked through the blinds at the house next door. There were some lights on and I could see some movement in one of the rooms, but no one was outside. I heard the sound of an echoing tinkling bell from behind me and I spun to the sound, dropping the towel in the process. Naked, I grabbed up the stake from the vampire kit still on the bed and scanned the room. There was no one there. Again, the bell sounded, soft and distant. It was my cellphone. Sitting on top of my dresser, plugged into the charger.
I breathed a sigh of relief. Maybe I had plugged it up before I headed to the shower and had absent-mindedly forgot about it. I went to the dresser and opened the top drawer. I grabbed some fresh underwear and slipped into them as quick as I could. Next drawer down, dark pants and a black tank top advertising an X-Japan concert my dad had taken me to in New York a couple years back. I turned away to grab my shoes and the bell sounded again. It was a cellphone notification of some kind. I woke up the phone and didn’t see anything to alert me to email or a message or anything. I hit the home button and pulled up the last used applications. The one at the top was the camera. I clicked it and the app opened to my photo gallery which was normal if you had just taken a picture. The top photo in the gallery brought me to a breathless stop. It was the picture of a tattooed moon, encircled by bloody vines, or perhaps veins. Under it were the words “Loveless”.
The first thing I thought of was that was the name of my favorite song by Luna Sea, but the next thought was the realization that this tattoo was on a boy’s hairless chest. And I knew for a fact I hadn’t taken it. I pulled up the tag info on the picture. It had been taken only a few short minutes ago, which meant there had been a boy in my room with a loveless tattoo and the balls to let me know he’d been there. But if he had thought to scare me with this, he was mistaken. Now I was pissed. I stuck the stake down the back of my pants and covered it with my shirt. I put the holy water in my front pocket and in one last gesture, removed the crucifix from my dad’s vampire kit and looped it around my neck letting it drop on its chain just out of sight down my shirt. I snatched the cell phone from the dresser and took one last look at the photo before sliding the phone in pocket. It was time to stake that pervert right through his tattoo.