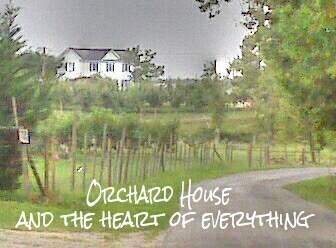 Part 10: Kenny In The Kitchen

“What’s the radio for?” she asked, after we stopped laughing. She pointed to the little transistor I had set on the counter earlier. “It wasn’t here this morning.”“Yeah, I got it from the top of the frig. Was listening to a little music after my walk.”

She raised an eyebrow. “Oh, do you dance?”

“Yeah,” I said, getting nervous as to where this conversation was leading.

She nodded, knowingly. “Yeah, it was a rock song. If you have a great country song you don’t even have to try to dance. Your body will do all the work.”

“Here, I’ll show you.” She reached for the radio and turned it on. The voice of Kenny Chesney came through the speakers, singing something about no shirt and no shoes. She grinned broadly. “Now that’s what I’m talkin’ about.” She got up and kicked her open toed shoes across the floor. “No shoes,” she said.

“Hey wait,” I started to argue, and then she took off her sweater and set it across one of the dining room chairs.

“No shirt,” she teased. Her silky tank top clung to her in all the right places, and with horror I suddenly realized what was coming off next: me from my chair. She grabbed my hands and pulled me up, despite my protests. “Come on, it won’t kill ya.”

“It might,” I said nervously. She was swaying to the music, a slow country rhythm, a touch of the waltz with a bit of the beach thrown in. She was moving my hands and arms to try and get me to move, but my dancing was like someone tapping their foot and just shifting their weight from one hip to the other.

“Come on, just loosen up a little. Let the music move you.”

I couldn’t loosen up. Not like her. She was moving like I hadn’t seen anyone move for a very long time. I thought to myself this must be how a celibate priest feels when they accidentally walk into a honky-tonk bar on ladies’ night.

“You are stiff as a board, Matthew. Just relax. Here, let me help…” She put both her hands on my hips and began to move them in time with her own.

It freaked me out a little. I wasn’t used to having my own personal space invaded. “Uh, Summer, can we please stop?”

She stopped dancing as suddenly as if someone had reached up and punched Chesney in the mouth.

“I make you uncomfortable, don’t I?”

“I’m sorry, summer. I’m not comfortable around people. Ok, girls. You’re young and pretty and we’re staying in the same house, and this is the most contact I have had with a female since Ashley.”

A sad look came over her. “Oh my, Matthew. What did that girl do to you?”

I hung my head. I wanted to cry, but didn’t want her see me do it. She was right after all, Ashley had ruined me. I couldn’t even look at another girl without feeling she wanted to get away from me, too. Or would, one day.

“Look, I don’t mean to make you uncomfortable,” she said. “If you wish, I’ll put on something different, or not look at you when I talk, but it’s not going to fix what she’s done.”

She picked up her sweater and slipped it back on. Then she walked around the bar, picked up her food and threw it in the trash. Turning from the trash can and walking past me she said, “I’m going to go now.”

I didn’t turn to watch her go, but I heard her pick up her sandals and put them back on. Her footsteps seemed to echo across the kitchen linoleum.

“She left me on our wedding day,” I said. “I loved her like I loved no one. I’d known her since childhood. We dated in school, lived together in college, played house for years after that. Then, one day I decided it wasn’t enough. I had to know she was completely devoted to me, committed to our relationship. So, I asked her to marry me and she said yes. Looking back, I realize she didn’t cry happily or beam proudly, she just said yes. I should have known then. She was about excited over our wedding as you are about sitting down and having a hot dog with me.”

She walked back to the kitchen bar and sat across from me. “I am very excited about sitting down and having a hot dog with you.”

I couldn’t look at Summer. I stared down at the bar wishing I could be saying these things from another room. “She never showed up. Do you know what it’s like to be sitting there and waiting and waiting and waiting for someone you love to show up and say ‘hey I just got scared. Forgive me?’ But she couldn’t even do that.”

“I do know what its like,” she confided. “I waited for someone, too.”

“Yeah, really. I waited for someone I loved to show up and say those very same things to me. And they never did. Years passed and I never saw their face again. I got beyond caring after a while, but I still think about it sometimes. One day I hope I will forget it completely, but I know I won’t without some kind of closure. And neither will you.”

I nodded. Suddenly I didn’t feel like my problem was the biggest one. Sitting across from Summer, I wasn’t half as alone as I thought I was. I had a friend. One who understood how I felt. One who wanted to understand how I felt. I was still uncomfortable around her; I wouldn’t be looking in her eyes anytime soon, but if the proverbial ice had been broken, she melted it with her next words.

“Sometimes Matthew, people just get scared. Some of us hide it behind a happy smile.” She smiled to show me she meant herself. “Some of us let the fear show in our every word.” She nodded in my direction. “I think you’re scared to move forward because you think nothing’s out there now.“ She reached across the table and patted my hand in a gentle gesture. “I’m scared that way, too.”

She squeezed my hand briefly, and let it go. Outside the world went on, while inside we were frozen in time, caught up in our own separate sadness, yet still feeling someone understood. Maybe that was a start in the right direction. Perhaps that’s how you move on, getting someone else to understand how you feel.

“Orchard House & The Heart Of Everything” 2016 Paul D Aronson.

3 thoughts on “Orchard House Part 10: Kenny In The Kitchen”