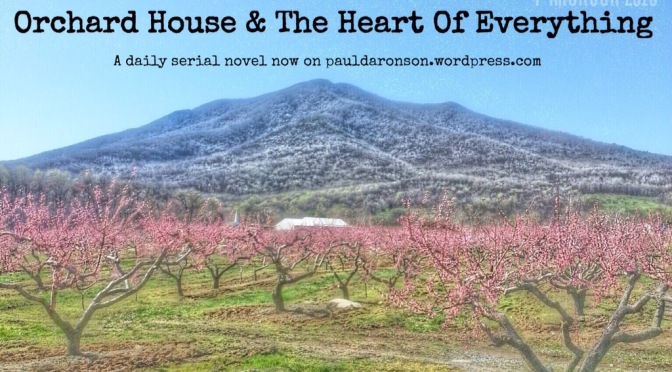 Hello everyone! Here we go with the second part of our twice daily serial novel 😉 Hope you enjoy!

Reluctantly, she got out from under the covers. Now that the sun was nearly gone, and the twilight of the evening was upon us, it had gotten a little chillier in the house. She started to dress, and I watched her as she slipped so perfect into her jeans. I smiled at the sight of her, thinking I had never watched anyone like this before, never been in such awe of a woman. “Look, I don’t know much about your romantic relationships before me,” I said.

“They were not like this,” she answered with a grin.

“I was scared all the time,” she added, slipping into her shirt.

I thought of how nervous I used to be, just being in the same room where my partner was dressing. Now it seemed to be the most natural thing in the world. No more shoe gazing, I drank Summer in with my eyes. “Do you still get scared? “ I asked.

“All the time,” she answered, sitting on the edge of the bed and putting on her shoes.

“That’s why I went to see Gunboats. I’ve never felt this way about someone, not even ..well you know who. And I was getting scared.”

“What are you afraid of?” she asked.

“That I won’t be good enough. That I won’t be able to keep you happy or interested. That I’ll disappoint you, fail you…well, you name it, I have a fear for it.”

She smiled and stood up. “Well, if it makes you feel any better, I’m scared too. But I think that’s part of what makes this so exciting…not sure of where this is going. Not knowing what happens next.”

“And if you know what happens next…if you could see where it was leading?”

“It will still be exciting.”

I sighed. “I guess I’m afraid it will reach a point when it won’t be exciting to you anymore. When there will be no more mystery…where everything will just be predictable.”

She kissed me lightly on the lips. “Then that will be okay too, Matthew.”

I looked into her eyes. “Are you sure?”

“Because soon it’s going to be time to go, and if we want to continue this, we’re going to have to make choices that could take the mystery out of everything.”

“I know,“ she said with a reassuring hug. “We’ve been so busy falling in love but I know eventually we’ll have to get busy figuring what to do about it.” She kissed my cheek and pulled away from me so she could look me in the eye. “So, what do you want to do next?”

I grinned. “Right now I want to dance.”

I could tell that threw her off. “What?” she asked.

I held my hands out to her. “Would you dance with me?”

Finally the look of confusion left her face and was replaced with a gentle smile. “I’d love to.”

As she slid up against me to encircle her arms around my waist, I stopped her. “Not here. Outside. One last dance in the orchard.”

Her face betrayed the fact she didn’t like the idea of a last dance, but she came with me anyway, as I led her out of the room, down the stairs, and through the lower part of the house to step out onto the side porch. The dusk til dawn light came on as we stepped out. The sun had fully disappeared on the horizon and the night was upon us. “Look,” I said, directing her gaze to the edge of the orchard. The light of the porch illuminated the trees at the head of the first few rows. It was the spot where we had our first dance, our first kiss. I took her hand, and led her off the porch to the very place where our love first truly began. I took her into my arms and she leaned her head on my shoulder as we slowly moved in time to the memory of the music from that time. I could hear the strains of the blues guitar in my head and I whispered the first lines of the song into her ear, “It used to be so easy…”

We softly swayed in time as I sang to her. With one hand on my hip and the other on my lower back, her lips lightly graced my own, temporarily silencing me with her kiss.

“I remember that night as if it were days ago,” she whispered with a playful gleam in her eye. “I wanted you to kiss me so bad, and when you finally did, my heart was dancing inside, and if it wouldn’t have sounded so teenager, I would have shouted, yes!”

I smiled, thinking I could get very used to hearing her say yes. But I had a confession of my own to make.

“Being with you this past week has been like the most wonderful dream.”

She snuggled her cheek against mine. “Me too.”

“You don’t have to,” she replied. “Let’s just keep dreaming.”

I spun her around and we drifted slowly into the first row of trees.

“I want to be your one and only for ever and ever.”

Another spin of the dance, and I looked in her beautiful brown eyes. “No matter what happens after tonight, I will always love you as if there’s no tomorrow.”

For a moment I felt her tense up in my arms. “What do you mean, after tonight?” she asked.

I kissed her behind the ear. “I’m always afraid each night will be our last,“ I whispered. “But tonight,” I said as we turned, “I want it to be our first night.”

“Our first night for what?”

We swayed ever so closely to the trees. I turned her so she was facing them, and before I could answer her question, I felt her body slightly pull from mine. “Oh my god, what’s that?” she asked.

She pulled away from me and reached for the nearest tree, the very same one the apple had dropped from as I looked into Gunboat’s envelope earlier. But, now the envelope was empty and its bottommost contents hung on the end of the twisted branch the apple had once dangled from. The light from the dusk to dawn light made it glisten brightly.

“Waiting for you,” I softly replied.

Gently, she pulled it off the end of the branch and looked at me. “Waiting for me, what?” Then distractedly she added, “She must miss it, we have to take it back to them.”

I smiled. “They gave it to me.” I took it from her fingers. “It’s inscribed now…see.” I turned it so she could see the small cursive script on the inside of the band.

“From one heart to another,” she began to read. “From our hands to thine.”

She looked incredulously at me.

“Summer, my beloved Summer, will you marry me?”

A look came across her face that leapt in happiness, and yet cowered just a little in fear. “Oh, Matthew, this is too…”

I slipped the ring on her finger and it fit as if it had been made for her hand. I thanked my stars that Hope as a young woman shared Summer’s ring size.

A tear dropped from the corner of her eye. “This is…” she said almost breathlessly. “This is…oh yes!”

She threw her arms around me, and I finally let out a breath. A smile came to my face so big it threatened to consume my whole head. The smile spread from my lips, to my heart, and into the very depths of my soul.

“Yes Matty, I will marry you,” she happily cried. And as we spun away from the trees, among the orchard we had come to call home, I felt like finally here in her arms I had found mine. All the weight of every previous disappointment, every moment of loneliness and despair, every notion of fear, every thought of not being good enough to be a husband…it was all lifted from me, as if God himself had reached down his hands and removed them from my shoulders. My heart now felt freer than it ever had before, and I thought about what Earl had said about a man never being free. He was wrong. I never felt as alive and free as I did right now, dancing in my bride-to-be’s arms and knowing she loved me so much she wanted to be my wife.

I don’t think every man fully realizes what it means when a woman says, “yes, I’ll marry you.” I think it’s often taken for granted, as if they think a woman has no choice in the matter, but I knew, and appreciated that she always had a choice, and to say yes was the most liberating thing for either of us. A lifetime of chains dropped from us both it seemed; the doors of our self-imposed prisons flung wide open. Every negative emotion left over from either Ashley’s non-committable heart or Earl’s lack of responsibility appeared to be replaced with the warmth and surety of a love that would not fall away, nor falter when it came time to stand up for someone other than ourselves. Summer was going to marry me, and with these thoughts, we lay in bed that night curled up against each other. I drifted off into a much better dream than I’d ever had with the knowledge that when I woke up, nothing could shatter my dreams ever again.

In the very early hours of the morning, before the sun, or even the roosters awoke, I found myself coming out of sleep. I prepared to crawl out of bed, But Summer in her own sleep must have detected I was stirring. She pulled me closer to her to prevent me from leaving. Of course, it was too early for a walk and conversation with Gunboats, but still I was thinking of his envelope. The ring wasn’t the only thing that had been in there. Also tucked inside had been some formal typed documents. On one, Gunboats and Hope relinquished the care of Orchard House to their daughter Helen while retaining ownership of the place. On another, this one more recent, Helen informed them she could no longer do this, as she wanted to focus on helping Raymond expand the family business of country stores and be there more for Twyla in her tender years. And in the last, the news that both Hope and Helen had informed me of on the porch swing, that Summer and I would be the last couple to stay at Orchard House.

I turned towards Summer and wrapped her tightly in my arms. So much had never happened in one day and I found myself so overwhelmed in my thoughts I felt I would never get back to sleep, but lying against her, feeling her warmth, the rise and fall of her breath as she slept so peacefully, like a baby being rocked back to sleep, I found myself slowly succumbing to that place of dreams where everything was going to be okay. And as the sun rose on our last day, both of us in our deep contented sleep, the fates still worked behind the scenes to see what they could throw our way next.

“Orchard House & The Heart Of Everything” 2016 Paul D Aronson.