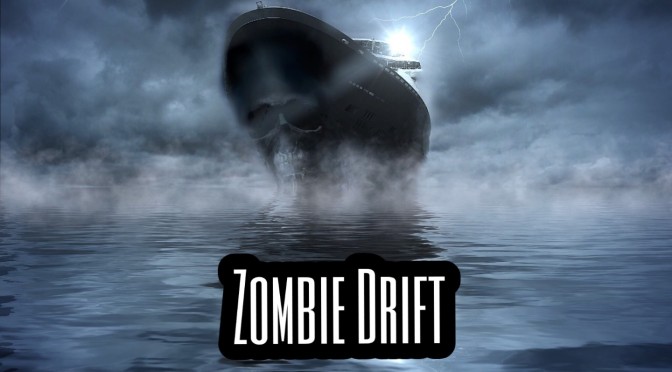 Lynn Billiot and Yeong, the boy she saved, stood at the railing, frozen in place by the events that unfolded in front of them. Down in the water below, the lifeboat seemed to thrash about on its tether. In reality, it was being pulled and jostled by the waterlogged zombies that had risen up from the ocean. The two men inside the boat were trying to fight them off, but it looked as if eventually they would find themselves in the water with the living dead, and then it would be all over with. Lynn knew they had to stay in the boat. There had to be something she could do. She looked over at the crewman operating the winch. Only he wasn’t operating it. He was trying to bring the lifeboat up but it wouldn’t budge. The chain seemed to be stuck. It was Yeong who pointed out the problem. A zombie had managed to climb aboard the lifeboat and stick his arm through the lower pulley causing the chain to pin his arm against the wheel, bringing the whole thing to a halt. Lucky for he and Lynn, they couldn’t hear the tearing of chain against flesh as the cogs of the wheel dug into the zombie slowly carving its way to the bone.

The lifeboat was at a standstill now, just inches above the water, as the zombies continued their assault on it, trying to tip the desperate occupants into the ocean. Now that the boat was stuck on its pulley this made it easier. Lynn, in desperation to help, looked all around, and in a flash of inspiration she ran over to the lawn chair where she’d left her books and pens. She didn’t bother with her writing, but instead picked up the chair and ran back to the railing with it. Looking over the side to see where the zombies were trying to tip the lifeboat, she let the chair go with a shout of “Fire in the hole!” She wasn’t sure what that meant, but she’d seen it in a war movie her dad liked to watch.

Luckily, the two humans in the boat knew what it meant. They had the common sense to get out of the way. Two zombies however had no sense at all and were hit by the chair just as they were climbing aboard the boat. They fell backwards in the water, and the pretty Alaskan girl turned to the Asian boy, who let out a whoop and gave her a high five.

“Awesome!” he exclaimed and turned around to look for some furniture of his own to throw. But three girls were rushing towards him. He tensed, knowing full well what was coming. He’d seen it before on the streets of Seoul, but he never imagined it would happen here where up until now he had enjoyed some anonymity.

One of the girls screamed, “It’s New Yeong!” The other two squealed in heightened excitement and started gibbering something about autographs and photos with their ultimate bias. They almost seemed to be getting in an argument about who got to have him when Lynn noticed them.

“You’ve got to kidding me,” she mumbled under her breath. She looked at the three girls, teenagers like her, and found them to be almost as frightening as the zombies in the water. Then she looked at the guy beside her. “You’re Yeong?” she asked, it finally hitting home that the boy on her best friend’s wall was the same one she just saved. In another circumstance, she would have been asking for an autograph too for her friend, but things had changed in the last fifteen minutes. “You’re really Yeong??”

The K-Pop star looked at her with what appeared to be fear, as if she too would be mobbing him like the trio before them. “Oh no, don’t worry” she exclaimed. “I’m not a fan.”

Before Yeong could even be put out by her statement, the three girls began to scream much louder. But they weren’t looking at the Korean idol anymore. No, they had finally seen what Lynn and their idol had been gawking at. The zombies in the ocean.

Neither Yeong or Lynn needed to answer them for one of the dead in the water emitted a loud moan that sent chills up their spine. It was trying to grab hold of the side of the ship below them but there was nothing for its broken, twisted fingers to grip. The zombie let out a string of moans and looked up, a brief glint in its eye.

Then the glint was gone and it was a mindless zombie again, trying desperately to get to where food was at. But Lynn didn’t want to be food. And though the k-pop fangirls looked like they wanted to eat Yeong themselves, it was apparent he wasn’t interested in them at all. He too busy looking forward towards the bow of the ship. Hanging over the railing, he had spotted something coming in fast, a speedboat that seemed to be trailing smoke behind it.

“Look!,” he shouted, pointing in its direction. Both he and Lynn could make out at least two figures in the boat. One was driving, the others was standing armed with what appeared to be an oar in his hands. As it drew closer, they saw the driver was a Hispanic man of sturdy build in gym sweats and a tank top. His standing companion was of African descent, wearing a white lab coat like a doctor. He shifted the oar to his other hand and raised it as if in greeting.

Lynn wanted to shout to them to turn back, to warn them of the zombies in the water, but then she realized they already knew this, for the speedboat accelerated and headed along the ship towards the lifeboat under siege. The occupants of the lifeboat also realized something was coming. Zombies and human alike turned to the boat’s approach.

Whack! An oar connected with two zombies as the speedboat rushed by, sending up a spray of water in its wake. The impacted zombies flipped off the boat, one of them minus his head from the blow of the oar. The two humans aboard, the bewildered crew member and Ethan, both looked on dumbfounded as the speedboat turned around and started to come in for another pass. A persistent zombie with one arm hanging loose tried to pull itself up onto the lifeboat. Ethan lunged forward and punched the creature in its face. There was a loud crack, followed by a spray of blood and gray matter. Apparently this one had been dead a very long time and its time at the bottom of the sea had weakened its bones. Ethan barely had time to shake his fist loose from the ruined skull when the crew member yelled a warning that’s sounded a lot like the words “Oh Shit!”

Ethan turned just in time to see another zombie climbing aboard. This one wasn’t wasting any time though. It bit down on the frenchmen’s arm, its half rotted teeth breaking against the skin. Ethan grabbed the living corpse and held it back at arm’s length. From Lynn and Yeong’s vantage point above, they could hear the horrid clacking of the zombie’s remaining teeth as it gnashed them together in a frantic attempt to bite Ethan again.

The speedboat came speeding by again just as Ethan shoved the zombie off the lifeboat. There was a sickening crunch as the thing nearly fell apart under the impact of the speeder’s bow. Ethan heard something splash behind him. He turned just in time to the see the crewman getting sick, retching overboard into the ocean. He grabbed him so he wouldn’t fall in after his own bile.

“It’s alright man, pull it together and…” He looked down. Water was covering his shoes. The lifeboat was sinking.