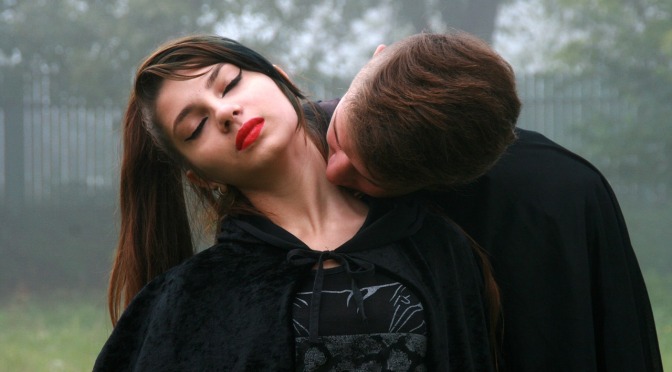 The vampire slid into bed next to the girl. She smiled in half sleep and curled up against him. Despite the age difference of hundreds of years, it felt perfect to her, their bodies touching each other like this. She offered her neck to him. He didn’t drink. He cried.

In the house of heroes, there is no glory. Only wasted men with hollow eyes whispering tales that grow vague in meaning as the years fade. Memories live on their tongues, stories dying to be yielded to the younger generations. Yet no one will listen. Technology is the new God. 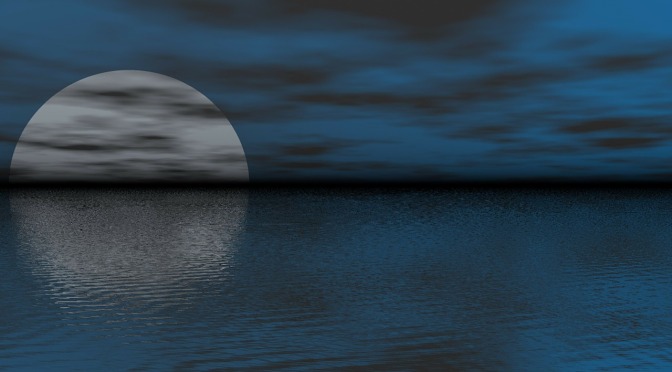 We’ve been adrift for days, out here in the far reaches. Our charts and compasses do no good, so we tossed them into the churning sea. We know there will be no voyage home. No one has been on the other side where faeries dwell, other than the stolen children. 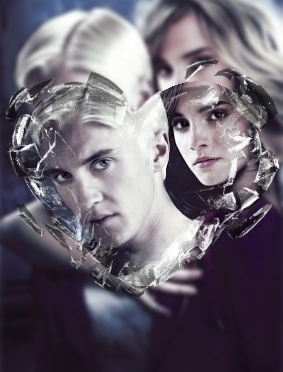 Love Is The Darkest Art

Hermione was crying. It had been only a few days since she’d stormed out of The Great Hall and met Draco on the front porch. But as wonderful as that rendezvous had been, now things had changed. Draco was angry and spiteful. Hermione was hurt, confused, and mad for what had happened to her friends. Harry was kicked off the Quidditch team. Ron was…well, Ron was Ron. But it all had begun with him, though at no fault of his own. All the blame lay with Hermione. It was she who had kissed Ron.

So it happened like this. Because Ron hadn’t been doing so well as part of the Gryffindor Quidditch team, she wanted to encourage him so Slytherin taunts wouldn’t distract him on the field. So before the day’s match, she’d given him a kiss. On the cheek. For luck.The effect on him was near miraculous. At first he was surprised. Then he blushed. Then he played one of his best games ever.

The effect on Draco wasn’t as pleasant. Though he’d witnessed it from afar, he still saw it. His Hermione kissing someone else. The smug, adoring look on Ron’s face. To say he was furious was an understatement. Granger was his girl. The only one she should be kissing was himself. And so, his revenge, his jealous retribution, was enacted onfield and after the match, resulting in three members getting kicked off the Gryffindor team. Harry. Fred. George.

The loss would most likely cause the Gryffindor team to disband. After all, how do you replace that many players? Still, that wasn’t Hermione’s thought when she confronted Draco outside the library just an hour after the game. “What the hell is wrong with you?” she demanded.

His look was smug and pleased with himself. “What is wrong with you?” he countered.

“I’m furious is what’s wrong with me. You got Harry kicked off the team! George and Fred too.”

He sneered. “I didn’t plan it that way, but they deserved it.”

He shrugged. “Maybe I’m just tired of being made the fool.”

Hermione was flabbergasted. “What the hell are you talking about?”

“How long you been kissing Weasley behind my back? Hmmm. What, you didn’t think I’d see? Or maybe you wanted me to see? Make an even bigger fool out of me? Or is that how you keep us secret? Make out with Ron where everyone can see?”

Now she truly was furious. And hurt. “No one is making out with Ron!” For a moment, she turned to walk away, but changed her mind. She wasn’t going to stand for this kind of jealousy from anyone. “You jealous little punk, I gave him a peck on the cheek for luck. And now you act like I’ve been cheating on you or something. Well, to hell with you, Draco. I don’t need you in order to feel miserable about myself.”

“Yeah, that’s right, you never needed me. You just wanted me to be like your other boys. Well guess what miss perfect, I’m never going to be like you or your Gryffindor boys. I am me. I will always be me. Stop trying to change me.”

“Draco, no one wants to change you. I like you for you. Yeah, some of the stuff you do to others irritate me, but I love…”

“Love? Ha! If you love someone you don’t go around kissing someone else. Just the other day you said all your kisses were for me, liar.”

“Damn it, Draco,” Hermione replied. “It was just a good luck kiss on the cheek. For luck Malfoy, not love. After all we have been through, do you honestly think….”

Hermione stopped. It wasn’t anything about Draco, nor Ron, nor even that hateful Dolores Umbridge. It was something else entirely that caused her to stop speaking. Her mouth was still moving. But nothing was coming out.

Draco was confused, but then looked beyond her. Luna Lovegood stood there, arm oustretched, pointing her wand at Hermione’s back. Tears were in her eyes. “You need to shut up,” she whispered. Draco drew his own wand and stepped back.

Then Harry, Ron, and Neville arrived. All three realized at once something was wrong. For one, Hermione was speechless, trying to move her mouth but unable to bring sound forth. Two, Luna stood with her wand out, pointing at the enemy. And three, Draco, the very one who had caused Harry to lose his position on the team that afternoon, was taking an attack stance. Harry drew his wand. “Why you…”

He let loose a spell and the energy left the tip of his wand. Draco blocked it easily, and then sent one right back. But it wasn’t aimed at Harry. Instead it struck Luna, knocking her off balance. She tumbled backwards.

Harry was livid, as he prepared to launch another blast at his foe. “It wasn’t enough to get me kicked off the team so you could finally win, was it? Now you want to attack my friends!?” He let the spell go and it sailed from his wand.

Draco spun and dropped to one knee to avoid getting hit. Hermione was shaking her head back and forth. Even he could see she was mouthing him to stop. He got to his feet, unsure of what to do, and that’s when a blast from Ron’s wand got him. He was knocked back on his butt, bringing his wand up in retaliation. He had been prepared to let this go and escape. But not now. Ron, his new rival, was going to pay. Draco knew he was better at the dark arts than Weasley. So he hit him hard enough to send him skidding across the hall to hit the opposite wall with a breathless “umph.”

His victory was short lived however. Neville socked him right in the mouth. Not with a spell. Nor with a charm. But with his fist. Which he now held in pain, but it was worth it to watch Draco’s head reel to the side for hurting Luna.

Draco rolled and came to his feet, shaking the dizzy spin from his head. He raised his wand, the worst curse imaginable springing up into his mind. Before he could utter it though, Hermione’s voice returned. “Draco!” she screamed.
He turned to her, a painful, hurt look in his eyes. Then he sent a spell that caused all the dust from inside the library to gather and come forth like a wall between he and his attackers. When it all came down and cleared, Draco was gone.

Now in the Gryffindor girl’s dorm, Hermione lay on her side in her bed, so the other girls wouldn’t see her tears. She just wanted to be left alone. They’d all tried to talk to her when she arrived in tears. Despite the silence curse having worn off, she still chose not to speak. She shook her head, retreating to her corner, ignoring their whispers, to cry alone.

Draco too was in tears, though he wasn’t in his dorm. He had abandoned Slytherin’s area to walk the hall like a ghost in his invisibility cloak. His friends, Crabbe, Goyle, and Pansy had driven him crazy with questions until he had told them all to shut up. He stormed out saying he had a meeting with Umbridge. Once outside, he threw on the cloak. There was no meeting of course, though he had imagined one would come soon. After all, because of his taunts at Ron during the game, some of the Gryffindor players had physically attacked him. Dolores, seeing an opportunity, had taken away his attacker’s playing priviledges, including their brooms. He had to admit it gave him smug satisfaction to see Potter lose his broom, but that was overshadowed by the argument with Hermione. He hadn’t meant to get so angry. It just bothered him to see her lips touch another, even on the cheek.

Now, hours later, he berated himself with his tears over how he had reacted. He couldn’t help it, he told himself. He loved the beautiful mudblood. He loved the way her mousy hair felt between his fingers, her hands caressing his chest. He loved feeling her heartbeat in his palm. Tasting the sweet-like-sugar kisses from her moist lips. He loved how she fit in his arms, how his body ached for hers as he fought the urge to take them further in their passions. For all these reasons, his tears fell, and a little voice inside his head whispered, wouldn’t you like to forget it all? To stop this pain, this jealousy, wouldn’t it be best to have it all erased? For a moment he found himself gliding to the dungeons and Professor Snape’s dank office.

He raised his hand to knock, then stopped. No, this can be worked out another way. With the back of his hand, he wiped the wet from his face. He didnt want to forget Hermione. He wanted her. He needed her in the way a spell needed a wand to work its magic. Without her, the darkest art, if that’s what love was, was nothing more than an empty cocoon with nothing inside. Draco was tired of being empty. He’d been that way his whole life. But she’d changed that in recent days, and now, despite the way things had fallen apart between them, he loved her. Covered in the cloak, he moved away from Snape’s door and went back up the stairs.

On the other side, in the cold, dark office, Severus sat, contemplating who it had been outside, knowing that whomever he’d detected, it undoubtedly had something to do with muggles and their way of weening their way into wizard’s hearts… 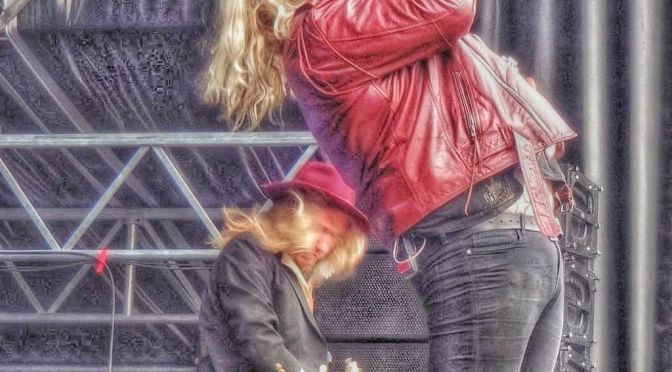 *just me telling a story in exactly 50 words*

The band plays on. Long haired singer, no longer twenty, the lines of experience now covered by a beard, belts out a lament of Glory Days. The drummer keeps the beat after all these years, guitarists still rocking back and forth in usion. Nothing has changed, only the public’s whims.

Note: The image for this post is the Uk rock band, Inglorious. Singer Nathan James is one of my fave modern rock vocalists.